Discover the pleasures of the great outdoors with the new Nature’s Kitchen Collection from Le Creuset, make the most of long days and warm evenings surrounded by all that nature has to offer. The new Spring/Summer 2018 collection features Le Creuset’s deep, aquatic Marine Blue and fresh Rosemary Geen in its signature Cast Iron, Stoneware, and Salt and Pepper Mills. The collection is complete with Le Creuset’s sleeek 3-ply Stainless Steel and Toughened Non-Stick cookware. Whether you grow your own or source locally grown produce, spring is the perfect time to start cooking with the fresh abundance of ingredients and our new delicious recipes make the most ofthe new season’s offerings. 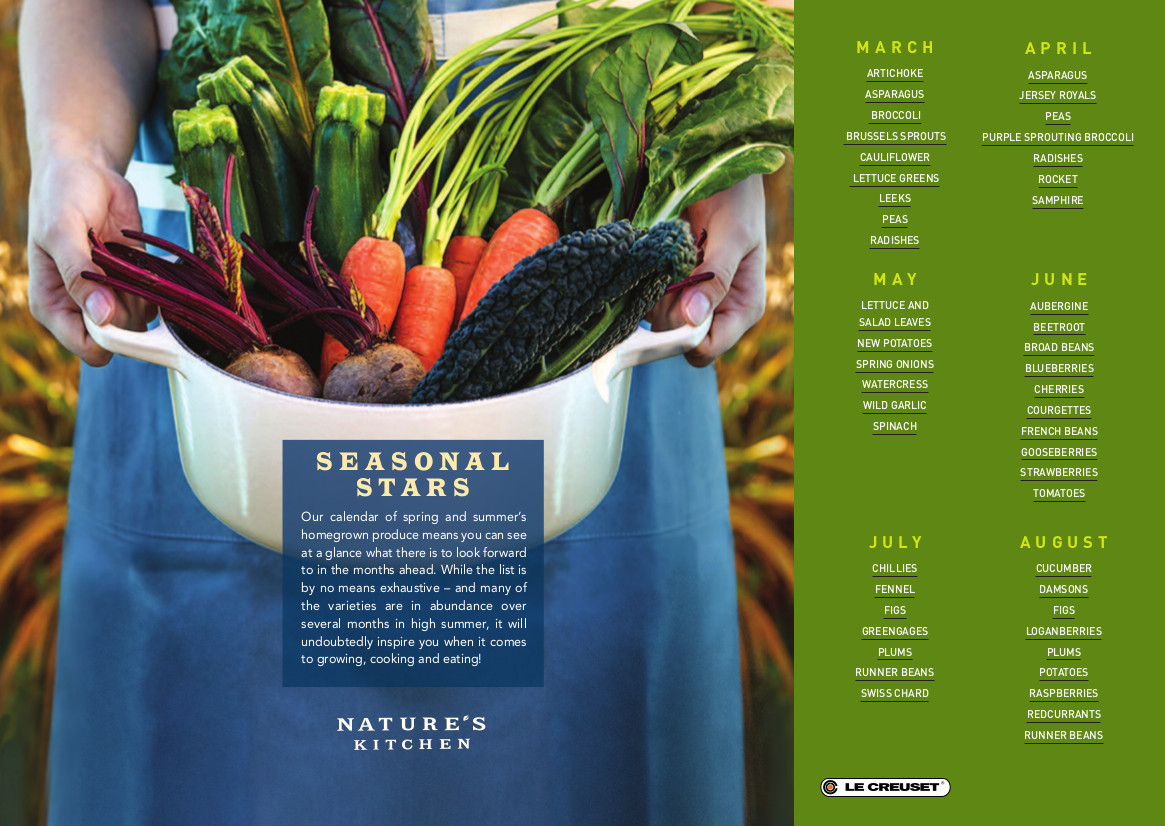 Roast Stuffed Leg of Lamb with Beetroot and a Mint, Caper & Honey Sauce

Roast Stuffed Leg of Lamb with Beetroot and a Mint, Caper & Honey Sauce 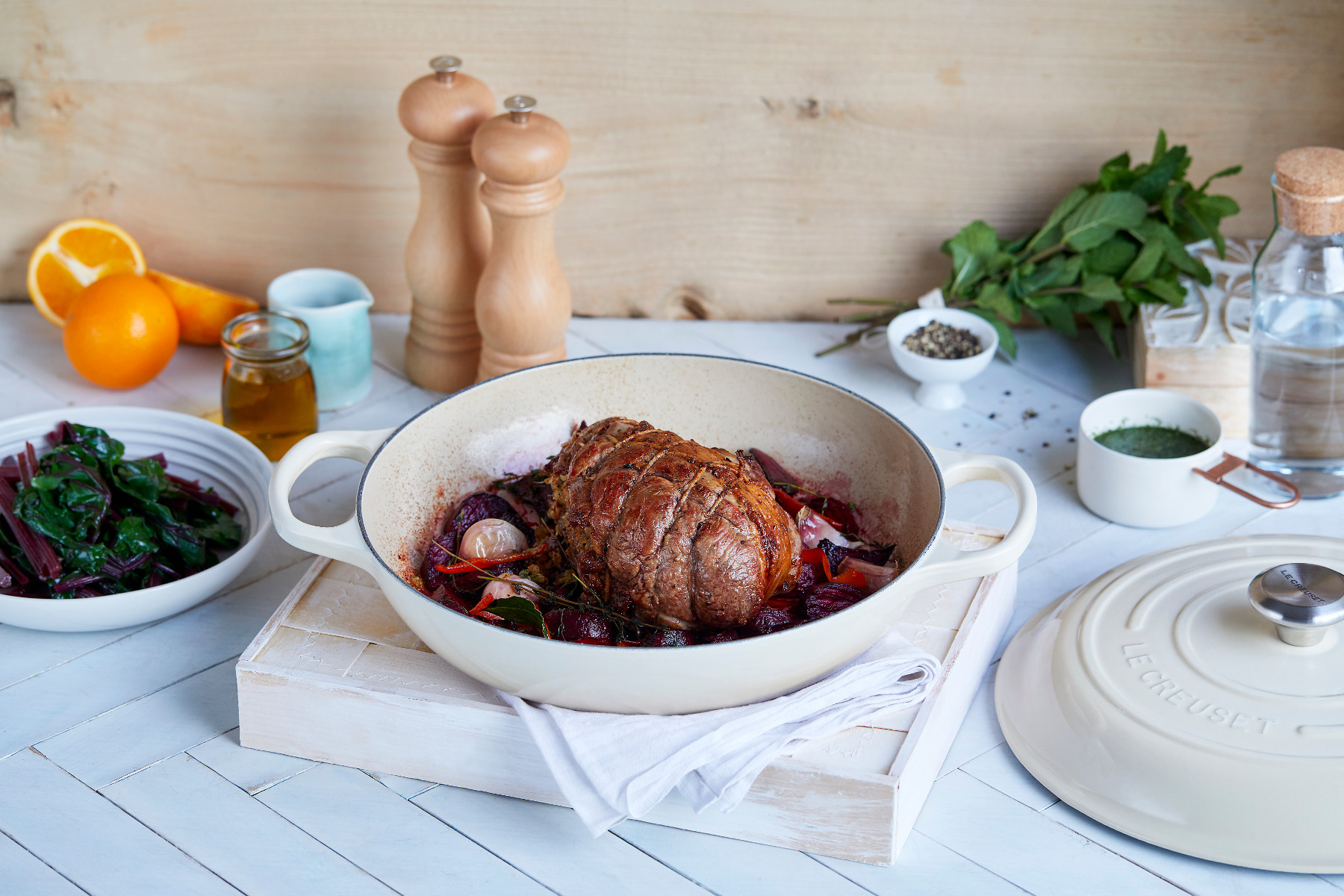 This recipe for a lamb dish is a little different from the usual Easter offering. It uses fresh seasonal beetroot from root to leaves and has Greek inspiration, for whom Easter is the most important religious time in the Christian calendar.

For The Mint Sauce 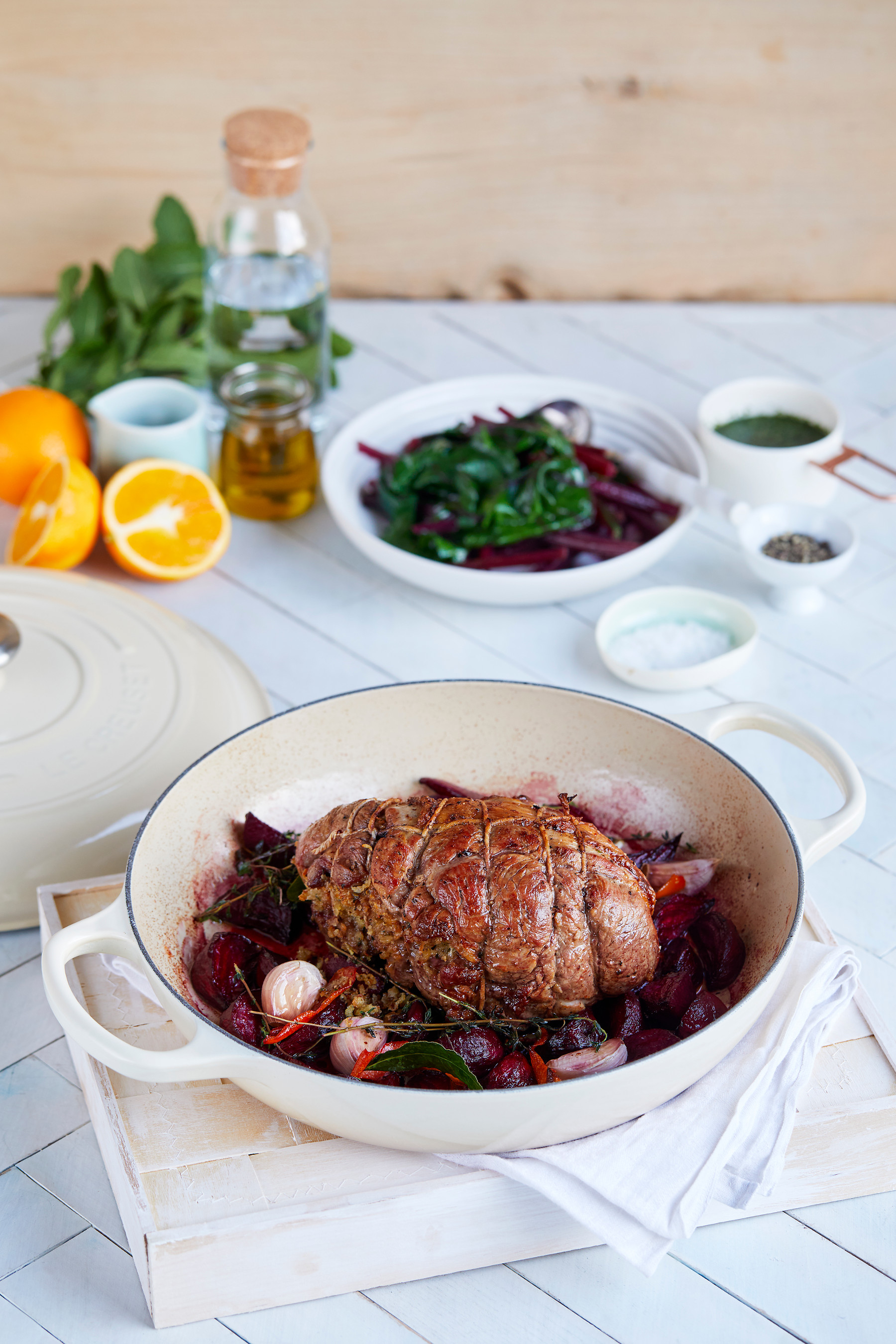 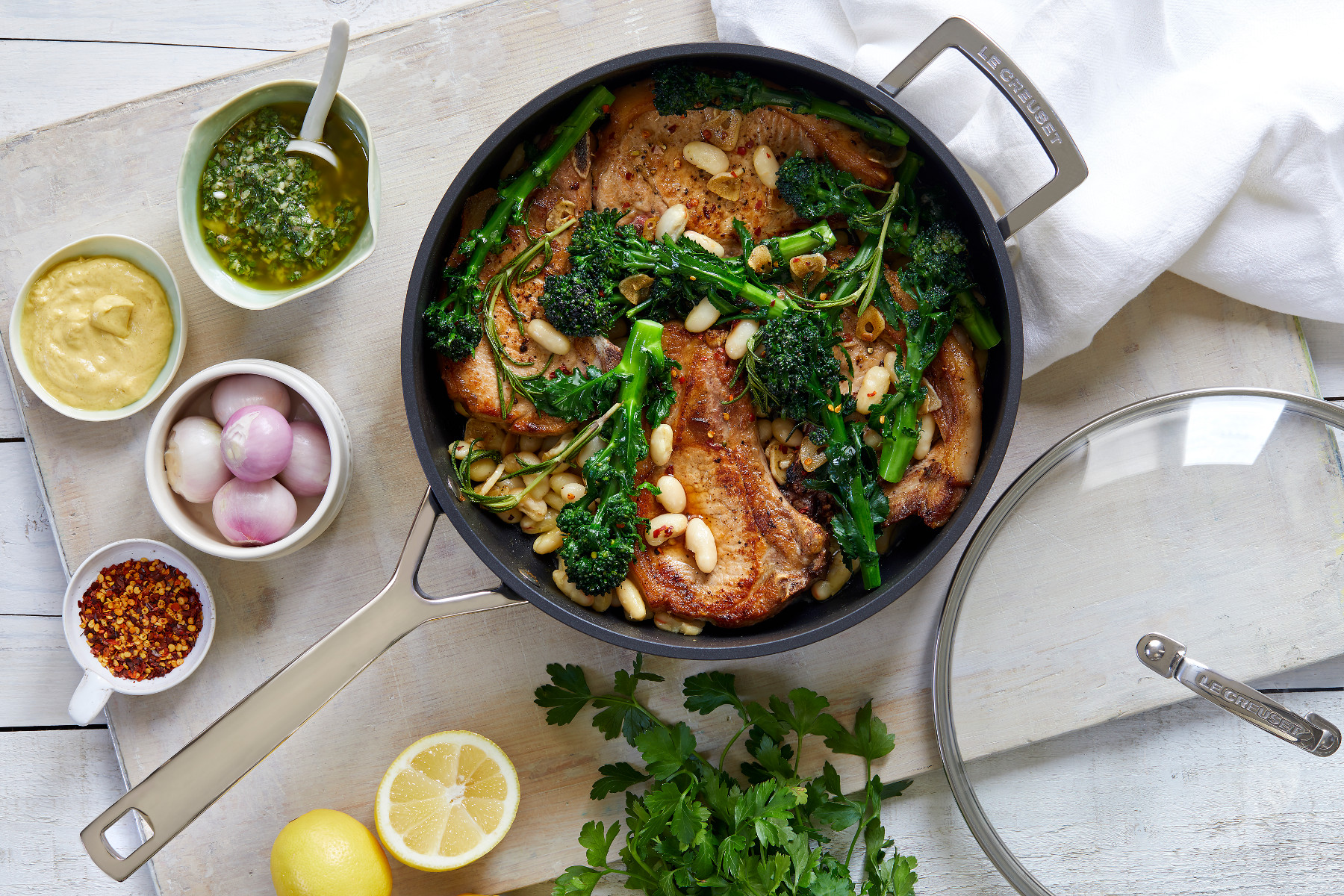 Purple sprouting broccoli provides a nice seasonal change from the more usual green broccoli. This recipe is full of flavour and texture, looks impressive served in the large sauté yet takes very little time to make.

For The Parsley and Anchovy Sauce 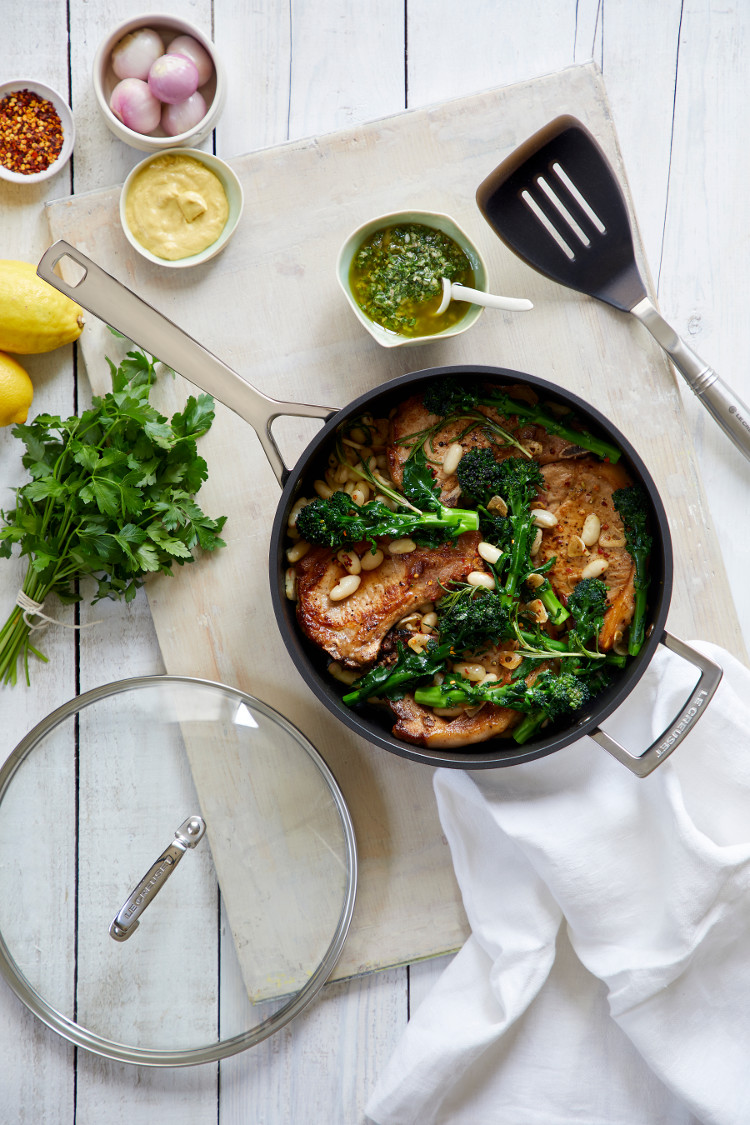 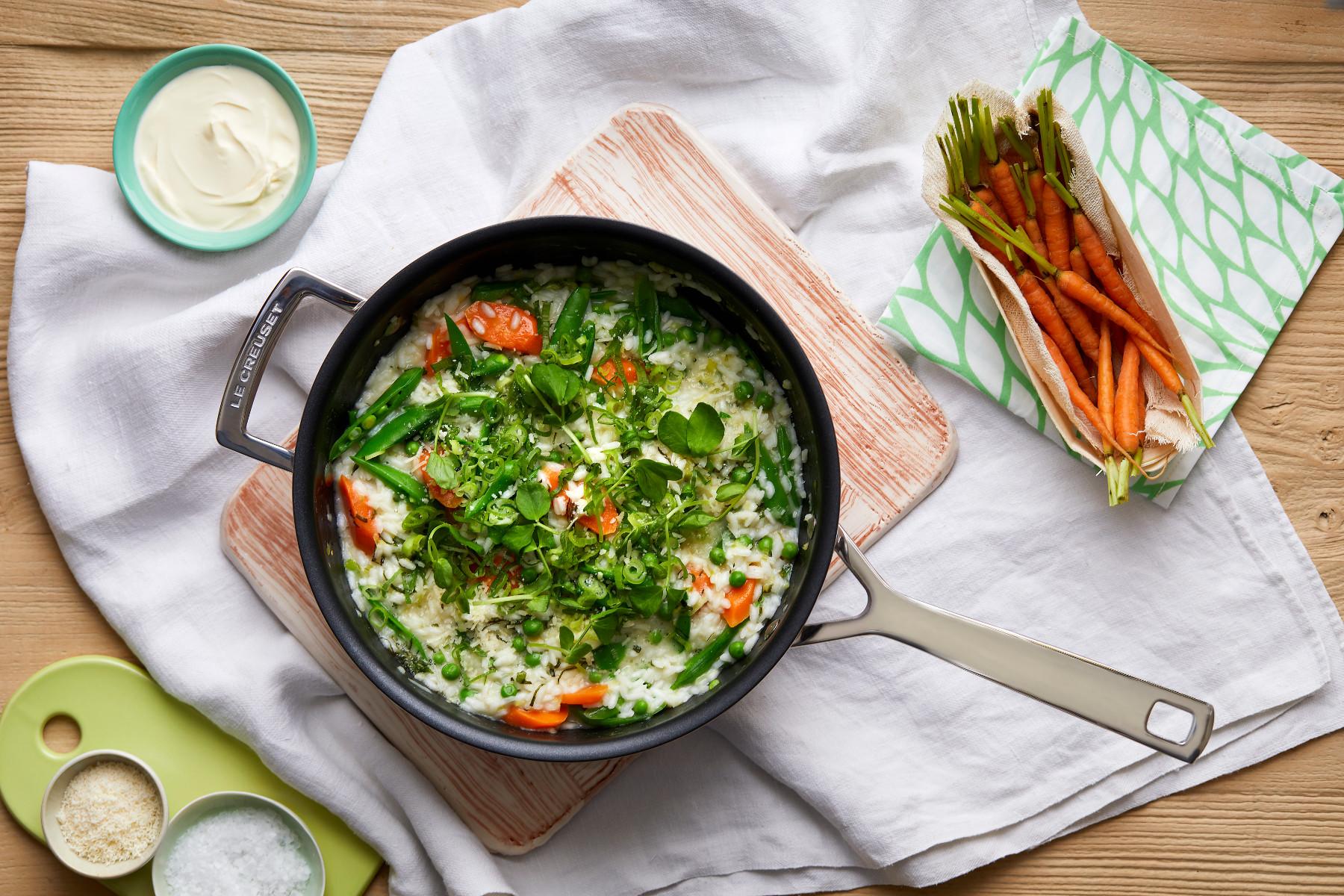 A good risotto should be nicely thickened and creamy, but still be loose enough to flow out and cover the base of a plate when you serve it.  Do try to use fresh stock for this as risotto is a dish that is all about the flavour of a really good stock. 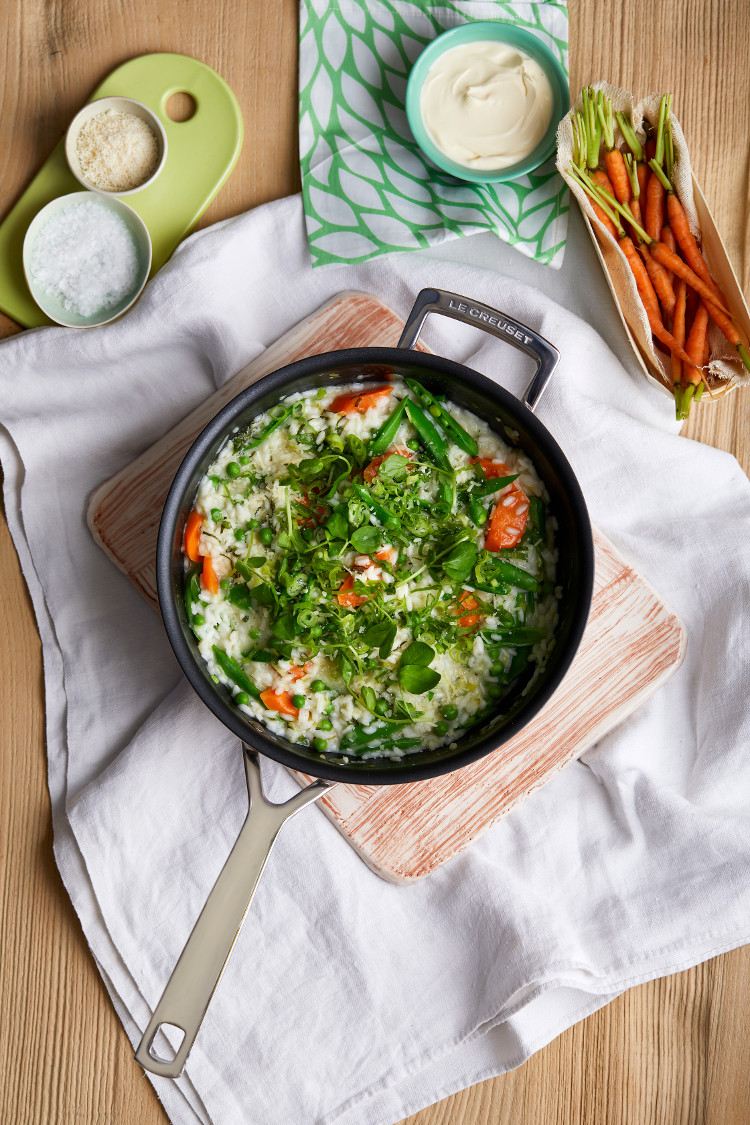 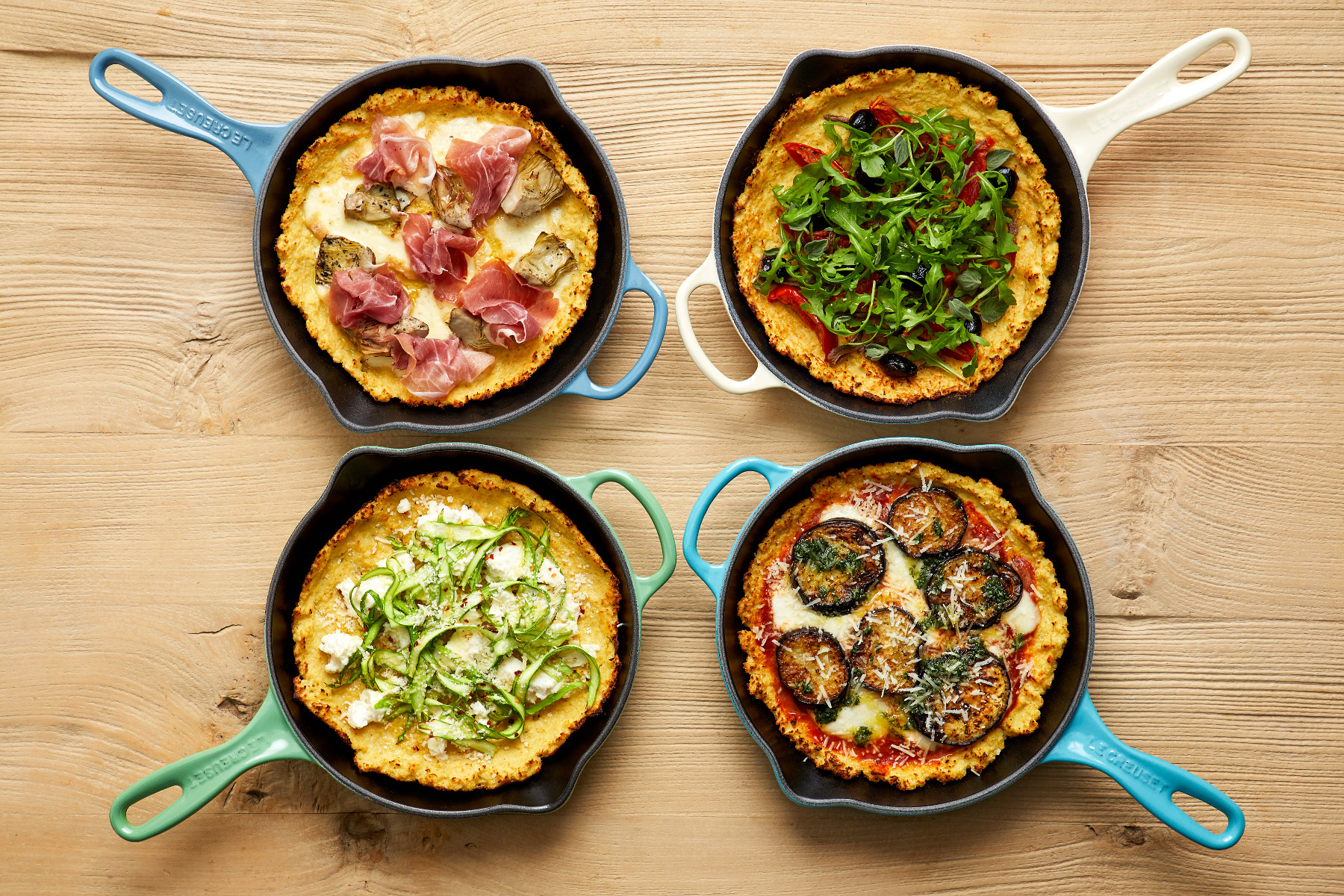 The new, healthy way to make fast, fresh and delicious pizza is with a moreish cauliflower crust and easy-peasy toppings, all made using the Le Creuset Cast Iron 23cm Skillet.

Place the Taleggio cheese slices and the artichokes on the pizza and return to the oven for about 5 minutes until the cheese is nicely melted. Remove from the oven and top with roughly torn Parma ham.

Cook the sliced aubergine (which will probably need to be done in two batches) in the skillet ahead of cooking your cauliflower base till nicely browned and put aside.

Then proceed from Step 4 above. Place the tomato sauce, mozzarella and then the aubergines on the pizza and put back in the oven for about 8 minutes until the mozzarella is nicely bubbling. Whilst it is cooking mix the olive oil with the chopped basil.  Remove the pizza from the oven and drizzle with the basil oil and sprinkle the pecorino cheese over and serve.

Season the ricotta with salt and pepper and spread it on the pizza base. Mix the shaved asparagus with the extra virgin olive oil and season and place it on top of the ricotta. Bake for about 8 minutes and then remove from oven. Drizzle the lemon oil over then sprinkle with the chilli flakes and Parmesan cheese.

For this topping, you will need to bake the pizza base a little longer before adding the topping. Bake the base for 15 minutes at step 3. Once cooked, mix together the oil with the garlic and oregano and spread this over the base. Place the anchovies, sun-blush tomatoes and olives on the pizza and bake for about 5 minutes. Remove from the oven and sprinkle the rocket leaves over. 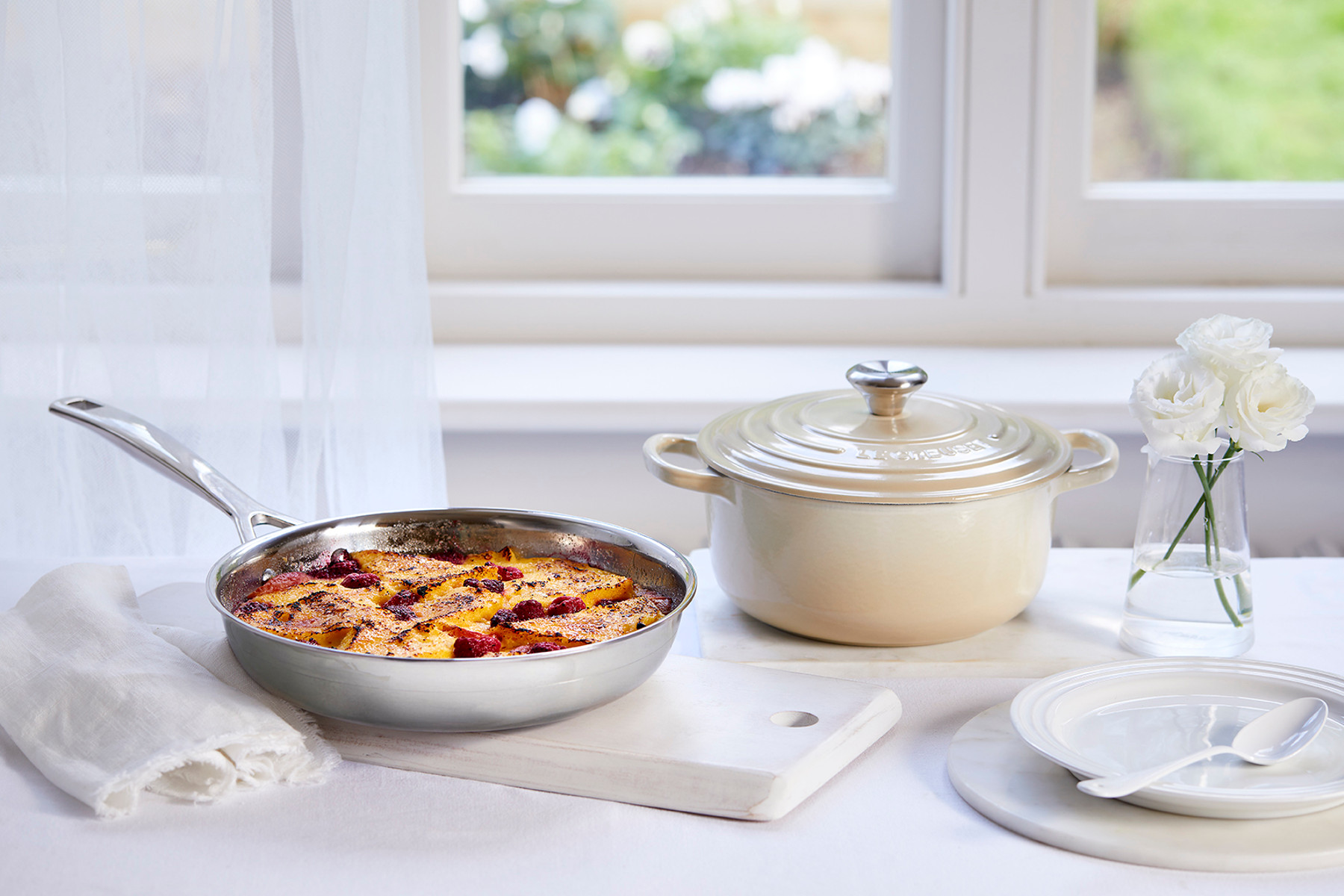 The trick to a good bread and butter pudding is not to overload it with bread! This makes it solid and heavy. A good pudding should be light and airy, the thinly cut bread suspended in a lightly set egg custard. 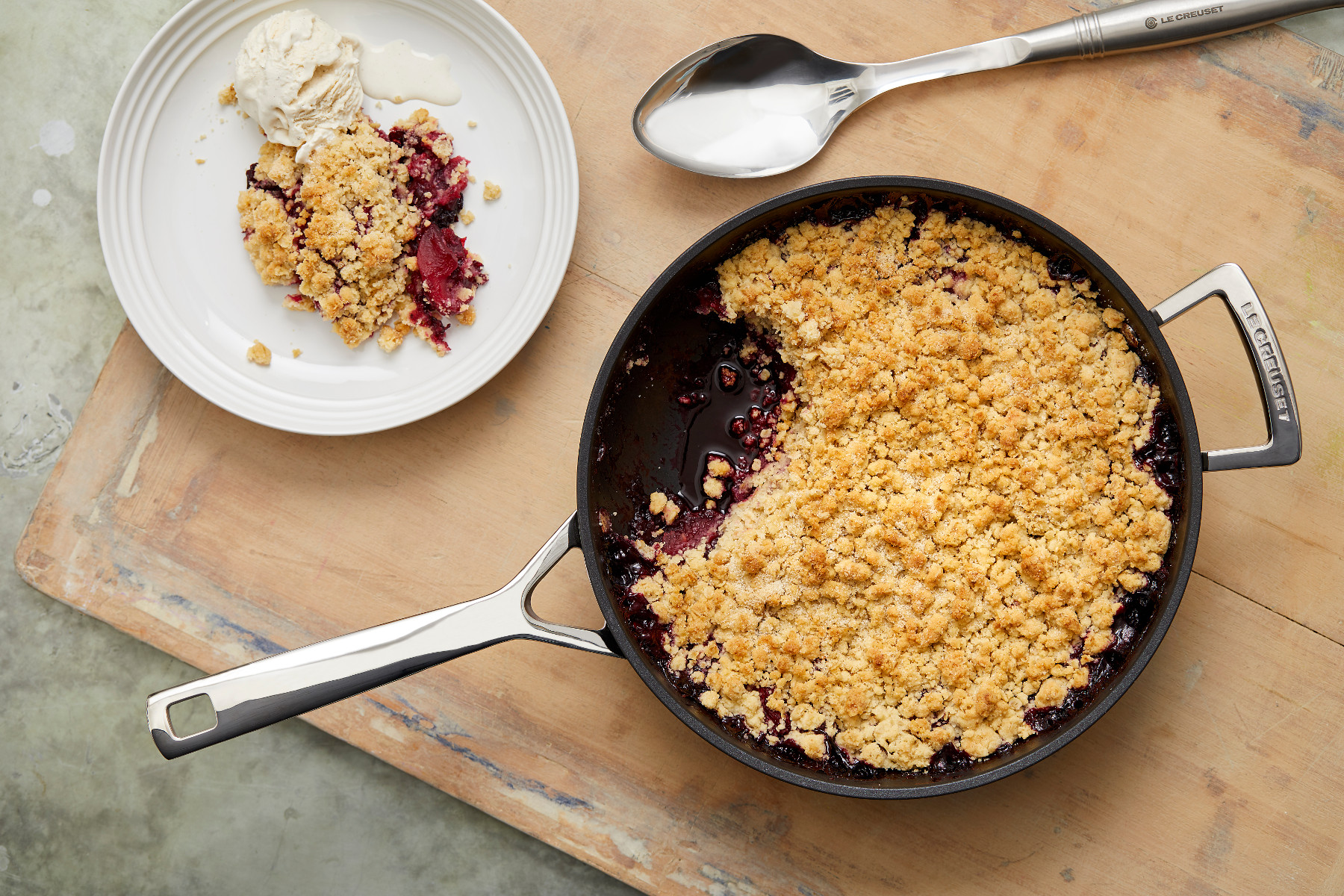 This is a firm family favourite recipe with a definite grown-up twist. The fruits are poached in the pan, using the glass lid, on the stove-top before the crumble is added and the whole thing baked in the oven. The crumble has oats added which give a delicious and healthy crunch. 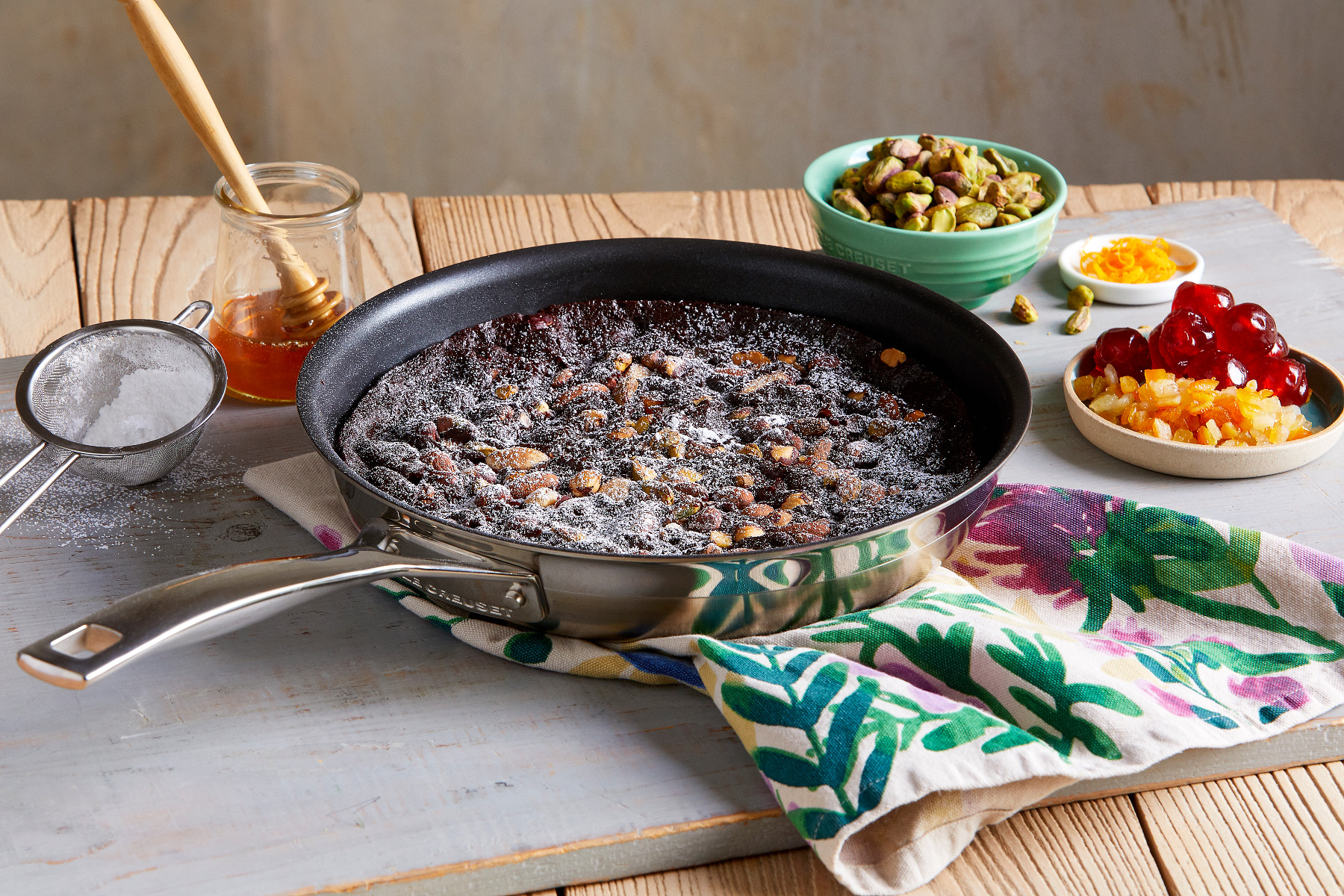 A classic Italian sweet treat with a chocolate twist. Made with a delicious mixture of toasted nuts, glace fruits, honey, sugar and dark chocolate combined with cocoa, flour and spices. Panforte is baked in the oven and has a chewy candy-like texture. It is dusted with icing sugar, cut into small slices and is served after a meal with coffee or with a dessert wine. Panforte is a celebratory sweet, often baked for special occasions and is a great alternative to Christmas cake. It is traditionally baked in a shallow pan making the 3-ply Stainless Steel 24cm non-stick Frying Pan a perfect choice.

The Best Swimsuit for your Body Type

15 Of The Best Scary Movies to Watch this Halloween

7 Pieces Every Stylish Woman Should Own

5 Winter Workouts and What to Wear

The Best Egg Puns (to make you crack up this Easter)

Under Armour | Meet the Brand